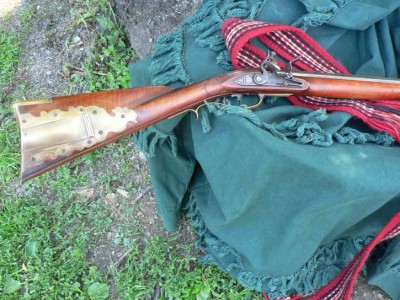 Whale Tail J.P. Beck Rifle This rifle can be best described as a documentary copy of the original. Fortunately, I had access to the original prior to and during the building process to assure that all details are correct. The gun starts with a 47 ¼” octagon to round barrel custom built by Ed Rayl to the dimensions of the original barrel. This barrel, however, is 45 caliber rifled, the original being about 50 caliber smoothbore.

The lock started as a Jim Chambers small Siler. It was extensively modified to reflect the look of the original lock, including conversion to a bridleless frizzen. The simple single trigger is square across the bottom, as was the original. The patchbox was hand built using the same hinge arrangement as the original. The opening mechanism, again, is exactly as on the original Back rifle. The engraving of the patchbox is a duplicate of Beck’s engraving. The hardware was cast by Reaves Goehring who used original Beck parts for the molds. The ram rod pipes are handmade to copy the originals.

All of Beck’s original file work was used. The stock is a modestly curled piece of maple, as was used on the original. The carving of the stock is patterned from the original. The finish is of the same hue as the original down to areas of shading including vestiges of an earlier varnish finish. This rifle duplicates the look and feel of the original and can be taken hunting or to the range. This long barreled rifle weighs in at a mere 7 ½ lbs.