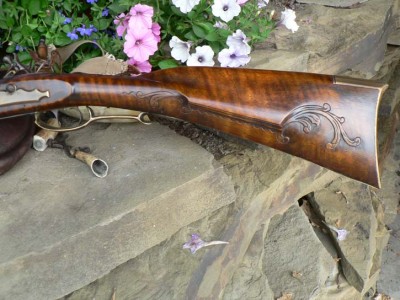 This modestly priced rifle is styled after an original Pannabecker which I have handled.  The original is remarkably similar to the one shown on page 188 of Kindig’s book, Thoughts on the Kentucky Rifle in its Golden Age.  Pannabecker is listed as a Lancaster maker, but his work reflects more of the Reading influence.  Note the Bonewitz wiggle line under the cheekpiece and the one piece nosecap.

This rifle was built around a 50 caliber 7/8 in. straight Green Mountain barrel.  The lock is a much modified Jim Chambers large Siler.  Keeping the shooter in mind, the gun was fitted with a set of David double set triggers.  The patchbox is entirely handmade and includes the flat style hinge favored by Pannabecker.  The curly maple stock has a lightly antiqued look, and the metal is brown.  The rifle weighs 8 pounds.