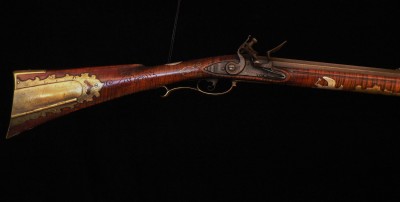 The rifle is a documentary copy of the most well known work of Andrew Verner, one of the two known signed Verner rifles.   This rifle has all the bells and whistles and was a challenge to build.  I am extremely grateful for being allowed hours of access to the original in preparation for this build.  The rifle is built using a Rice 46″ swamped 50 cal. barrel that is a near duplicate for the original barrel.  The lock is a modified Golden Age Siler.   Reaves Goehring supplied the castings which were copied from original Verner hardware.  The rifle was built as nearly as possible to the measurements of the original rifle, the carvings, wire work inlays were all duplicated from the original.  In finishing the rifle I attempted to reflect the look of the original as it is today.  The corners were slightly rounded where appropriate.  A red tinted violin finish was applied to the whole gun and then rubbed back and in some areas completely removed or darkened to reflect the condition and aging of the original rifle.   The rifle has been sighted in and  ready for use or display.

The pistol, is based upon details of several known Verner pistols plus a little artistic license.   The pistol has an 10″ octagon to round 50 cal. rifled barrel, and uses exactly the same size ball as the above rifle.  The small Germanic lock reflects the look of the rifle lock.  The carving, wire inlay, inlays all emulate those on the rifle thus these two closely related items are being offered in a combo package.